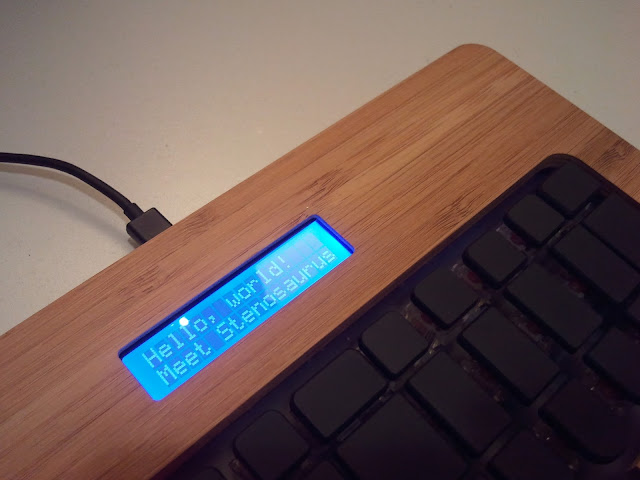 I managed to find some time on the bus ride back from LinuxFest Northwest to get the LCD working. The display will be used for onboard editing of the dictionary when using Stenosaurus in standalone mode - i.e., not using Plover and presenting itself as a normal USB keyboard to the host computer. When using Plover, the display isn't necessary, but might still be useful in some way I haven't thought of yet. Either way, Stenosaurus won't require any special drivers to work.

Next up to test are the microSD card and the USB port.
Posted by Joshua Harlan Lifton at 11:00 PM 2 comments:

We've had printed circuit board assembly (PCBA) for the Stenosaurus for several months, but I've only recently been able to begin properly testing it. Here are the tests I've run so far:

In short, everything is going well, though there's a lot more testing yet to do. Next steps include:

That's pretty much it for the major subsystems. Once those are tested and check out, we move on to actually programming the Stenosaurus to be a working steno machine that interfaces to Plover via the TX Bolt protocol. This is where Hesky's good work from a few years ago (I can't believe it's been so long) will really shine. If things go well, his code that worked on an early development board will need only a bit of modification to work on the current prototype.

Of course, even if things go perfectly, I already have a short list of minor improvements I want to make to the board, which will require another production run. This list includes updating the style, positioning, and type of LEDs, moving the JTAG connector so its shroud doesn't interfere with nearby components, and revisiting the need for a JTAG connector in the first place (might use a pogo pin jig instead).

Progress is being made. Stay tuned.

Cheers,
Josh
Posted by Joshua Harlan Lifton at 12:16 AM No comments:

Not to let too much time go by since the last post, here are the very first images of Stenosaurus that has all its main components:
Right away, you'll notice that the key caps and side rail have changed color from clear anodized aluminum to black anodized aluminum. The back plate, which is still clear anodized aluminum, shows the contrast. In the final units, the back plate will be the same color as the key caps and side rail. Most likely, there will be several color options available, including both clear and black.

There are still some features missing, such as rubber feet and tripod mount, but this is as close as we've yet come to a complete Stenosaurus. I'll be running some tests this weekend and will report back results soon. 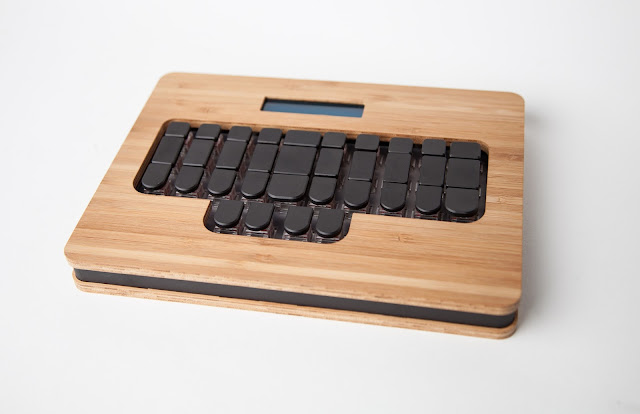 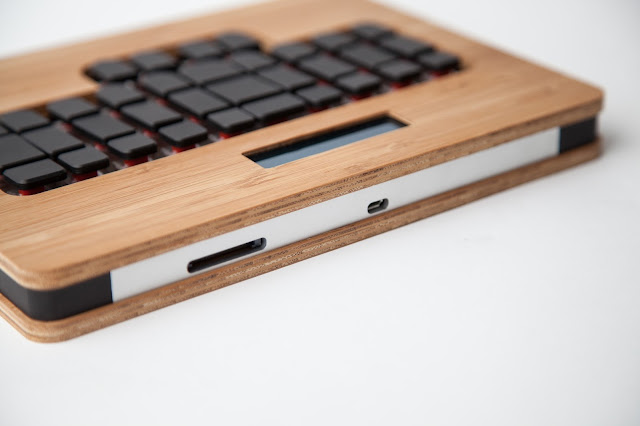 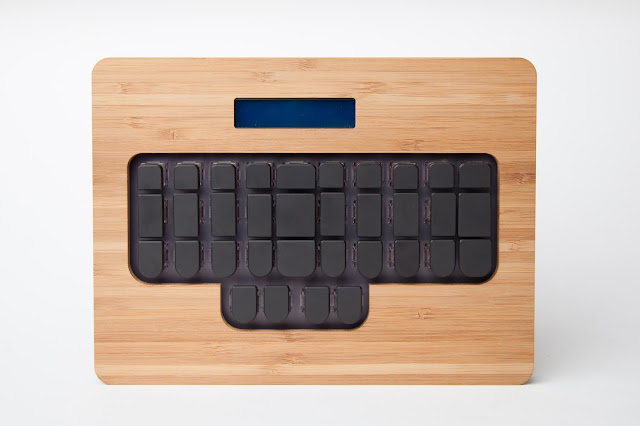 Posted by Joshua Harlan Lifton at 3:47 PM No comments:

The enclosure Kurt designed is composed of four main pieces: a top panel of milled bamboo, a bottom panel of milled bamboo, and bent piece of aluminum that serves as most of the siding, and a straight piece of aluminum siding in the back that accommodates the micro USB connector and the microSD card slot. Below are shots Kurt took of an assembly of those first three components.

The wood has been stained and the aluminum has been bead blasted and clear anodized. The inner face of the bottom panel has recesses at the location of each key switch so that the switch pins that protrude slightly through the PCB won't interfere with the PCB sitting flush with the bottom of the enclosure. The circular hole in the center of the bottom panel will house a threaded insert for mounting to standard tripods. 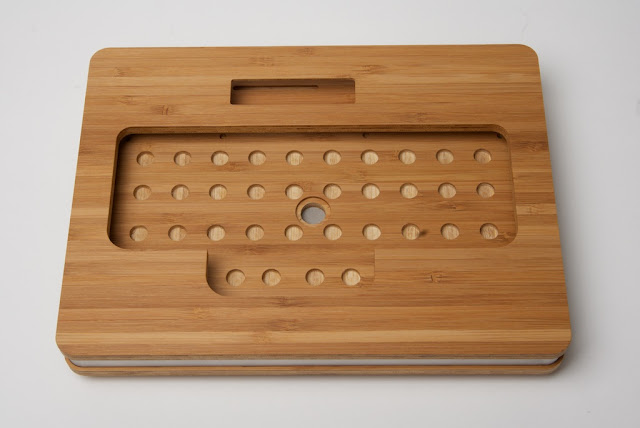 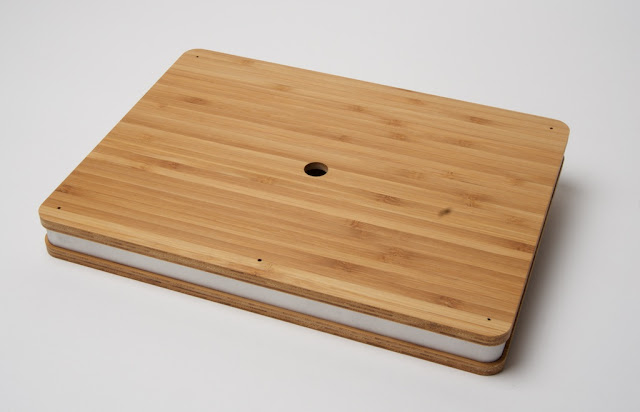 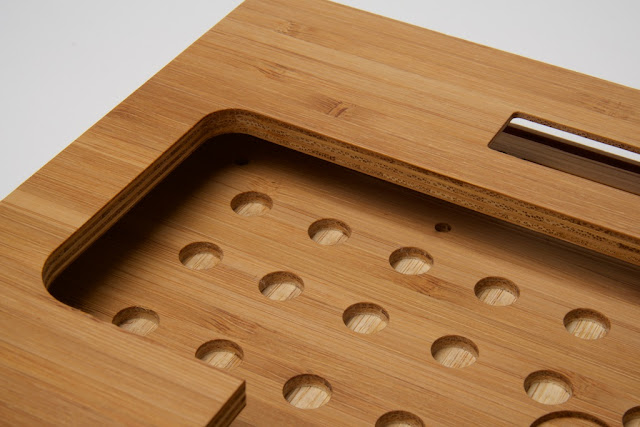 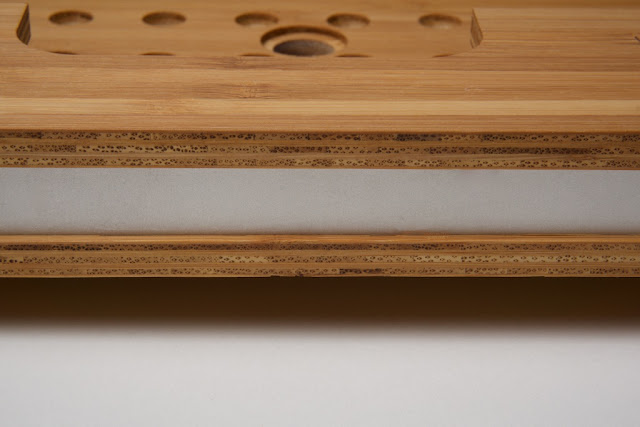 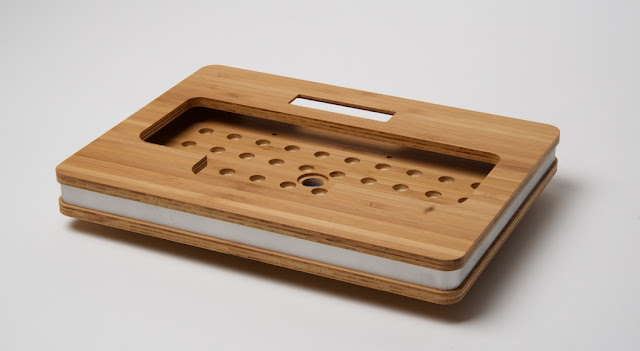 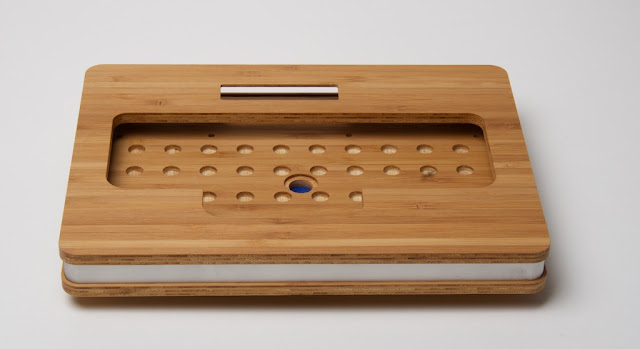 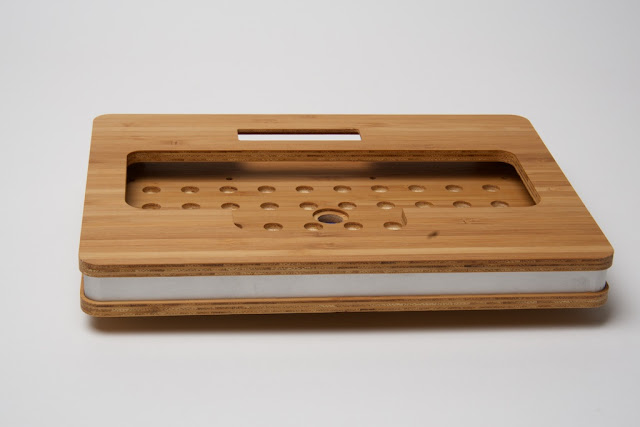 Posted by Joshua Harlan Lifton at 6:25 AM No comments:

Here are some images of some material and process tests Kurt has been doing on the case and key caps, as well as some shots of the first prototype of the internals.

Posted by Joshua Harlan Lifton at 12:14 AM No comments:

The first Stenosaurus printed circuit boards (PCBs) arrived yesterday. Below is an image of a Stenosaurus PCB wth some components. 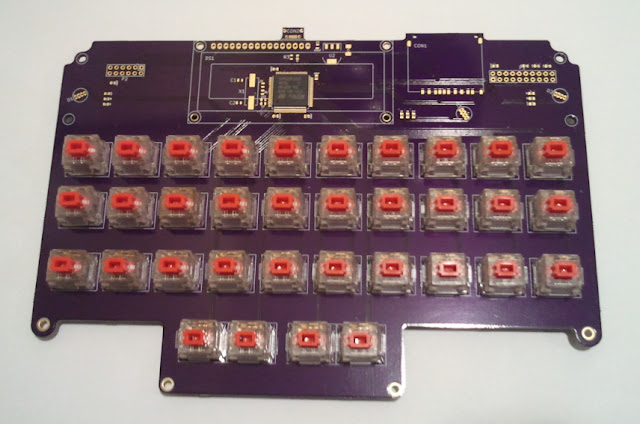 A few things to note about this image:

I'm expecting to receive tomorrow the remaining components needed to complete the assembly of the circuit board. Once assembled, I'll begin testing and report back here.
Posted by Joshua Harlan Lifton at 12:34 AM 1 comment:

Printed Circuit Board Design and Status

The insides of the Stenosaurus consist of a single printed circuit board (PCB). The above image is a top-down view of the current state of the PCB design. The four rows of rectangles with two circles each correspond to the key switches. The protrusion near the center on the top side is the micro USB connector, which is how the Stenosaurus will connect to a computer. The protrusion to the right of the USB is the SD card holder, which will be where the steno dictionary and other settings will be stored. The concentric rectangles below the micro USB connector is the LCD. Everything else is what's needed to make everything work together and mount the PCB to the physical case.

This is a work in progress. The board outline and placement of the main components pointed about above are mostly finalized. The positions of the remainder of the components is still in flux. Most critically, the electrical connections between all the components haven't yet been routed, which is the next and final step before this design can be sent out for manufacturing.

All this is to say that progress is being made toward the first manufactured Stenosaurus! More soon.
Posted by Joshua Harlan Lifton at 11:40 PM No comments: